Success Can Be Fun! 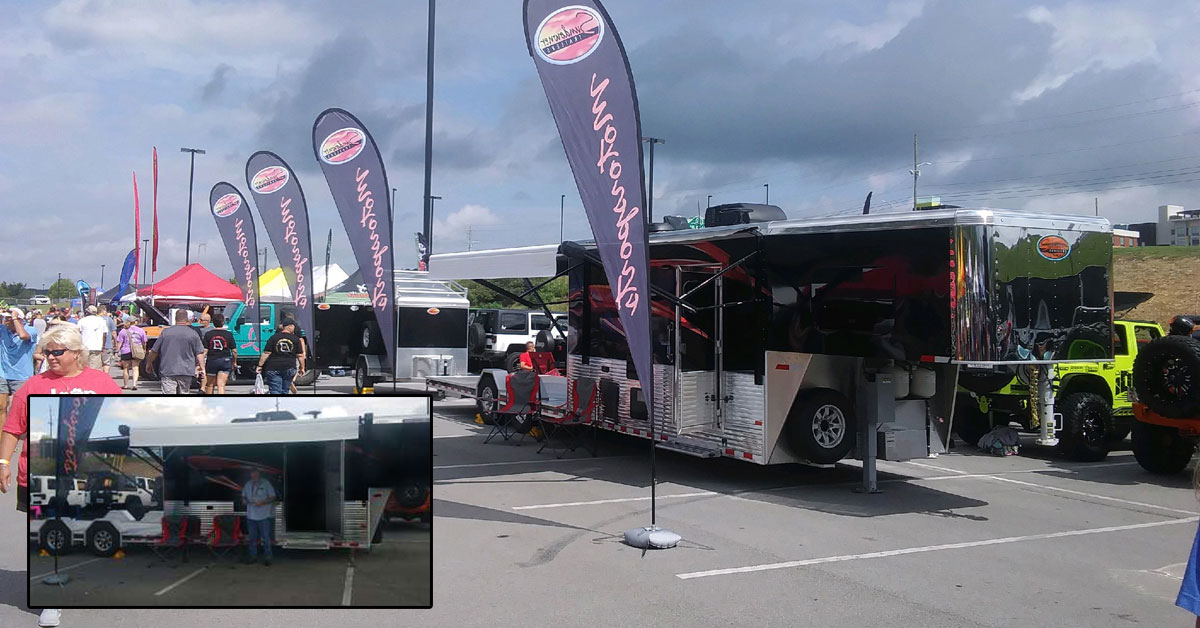 I would like to personally thank all the people who attended the Great Smoky Mountain Jeep Invasion this year in Pigeon Forge Tennessee. I had a great time and the response to our toy haulers was incredible.  In the two days there we had over 750 people go through our toy hauler and made a lot of contacts. They were very excited to see this new Sundowner model that’s being offered and we were proud to be there showing it!

We hope to see you and your friends again next year!

This gathering will be holding a variety of events, including a Show & Shine competition featuring mud-free Jeeps at their best, a must see!  The GSM Jeep© Club Invasion sponsors the Smoky Mountain Service Dogs, a charity which provides specially trained service dogs to disabled veterans.

So come on down and say “Hi” at our 80 foot lot outside the Convention Center among well over a hundred other vendors enjoying this truly awesome event! 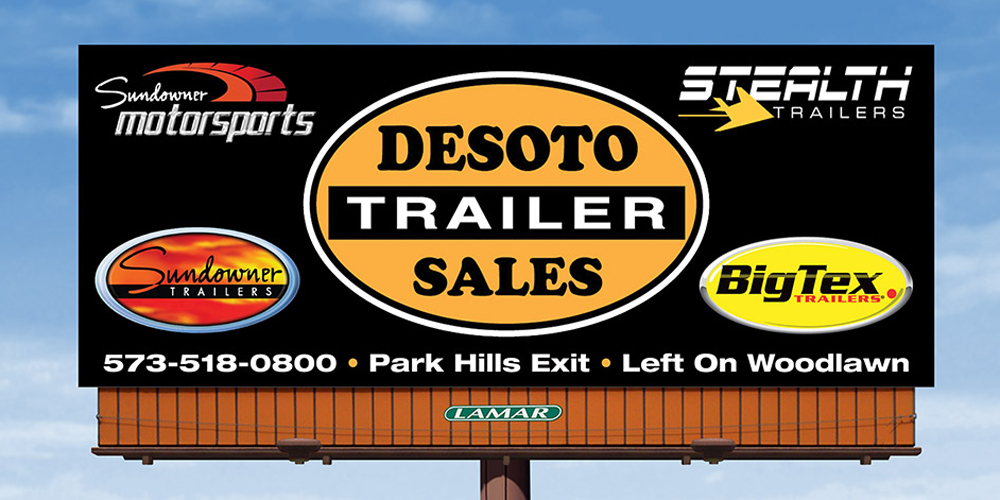 Look for our new sign just south of St. Francois State Park off the south bound lane of highway 67 at the Cherokee Landing Big River Crossing. If you need more detailed directions just give us a call or look us up on Google Maps.

It was a normal, busy Friday at the shop until a trailer full of donkeys came limping in. That’s right, “Donkey’s” and none other than the Dairyland Donkey Ball team from Chippewa Falls, Wisconsin!

While in route to Potosi High School for a Donkey Basketball Athletic Fundraiser, the trailers wheel bearing seized up and the donkeys were forced to overnight in Farmington. It was beginning to look like the Potosi Donkey Ball game was going to be cancelled. After all, what are the odds of finding a trailer dealer with a shop AND a big enough parts inventory to get the trailer road worthy in only a few hours?

Calling and rummaging around town for a trailer repair shop wasn’t panning out, but then off to the west he seen that big red sign that said “DeSoto Trailer Sales” and when he saw all those trailers and that huge building in the rear, he knew he had a chance. Of course this still didn’t guarantee he would make it to the game on time, as he didn’t know if they could even schedule him in!

That’s one thing you’ll find at DeSoto Trailer Sales, when it’s an emergency Larry and his team will schedule you in and that he did. Immediately Randy, the go-to mechanic determined the axels spindle was still in good shape and was able to remove the spent bearings and thanks to Daryl the parts were in stock and since they were also needed, did a brake job as well. Thanks to DTS the game was saved; almost…

Although they didn’t make a single Hee Haw about it while waiting for the repairs to be completed, the Dairyland Ball Team was getting a little hungry. Now nearly a day behind, the hay budget was getting low and no local farmers had any to spare. Not to worry as Larry stepped up once again and dug into his personal stash of premium square bales to get those athletes back into game shape!

After a day like this it earned Larry a set of free tickets as well as an honorary ovation at the game for “saving the day” for the Dairyland Donkey Ball Team. So the moral of the story is, when your trailer is broke down and the going gets tough, stop by DeSoto Trailer Sales and we will get you’re a**, well Donkey back in the game! 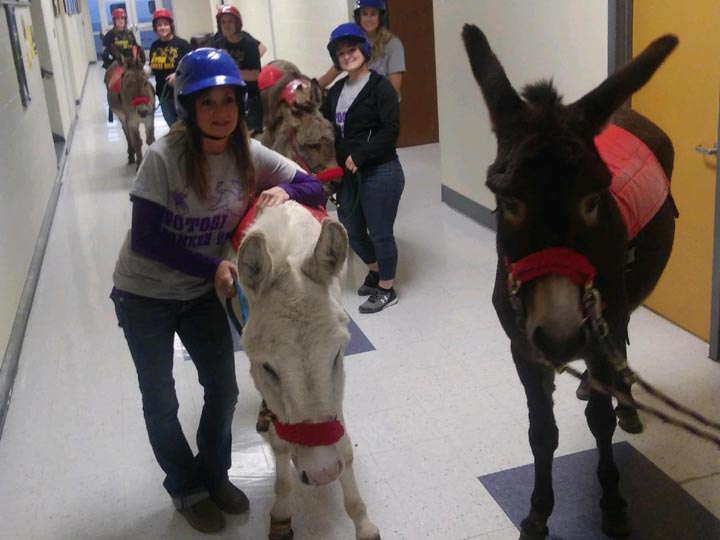 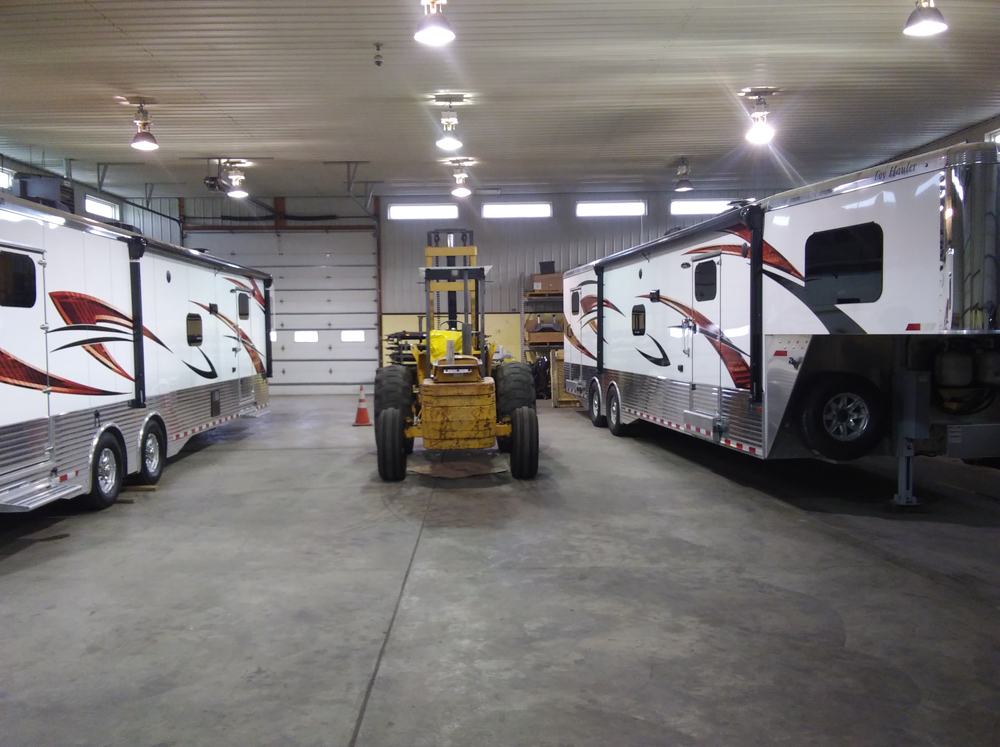 No this is not the same Toy Hauler in some kind of weird, mirror image time warp!  The one on the right belongs to one of our very happy customers and has it in for servicing (see photo below).  The one on the left is actually a foot longer (40 ft) and is awaiting its great adventure with you! 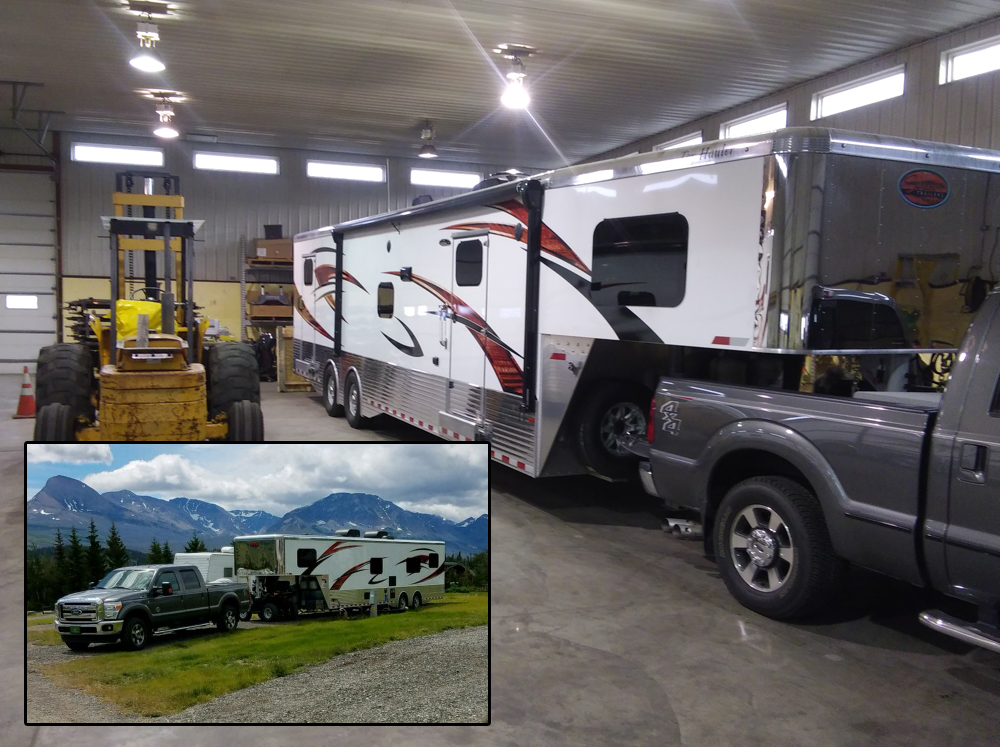 You may remember seeing this on our Home page a couple months ago, after Bob sent us a few choice photos of his trip right after purchasing it (great pic’s Bob!)  Both are Sundowner’s “Open Model” Toy Haulers and not only do they have many great features and components, but have some very real advantages over the closed garage models.  Coming soon you’ll see Bob’s awesome adventure pictures pop up in our photo gallery.

You may also notice in both photos all the room we have in our new spacious shop.  We are here to tell you we couldn’t appreciate it more and you would think that having the smaller attached, two bay shop between it and the front office and parts store would really put us on cloud nine, but no that is not the kicker.  The real kicker is keeping the same go-to mechanic that has worked this shop for years.  Now that puts us over the top! 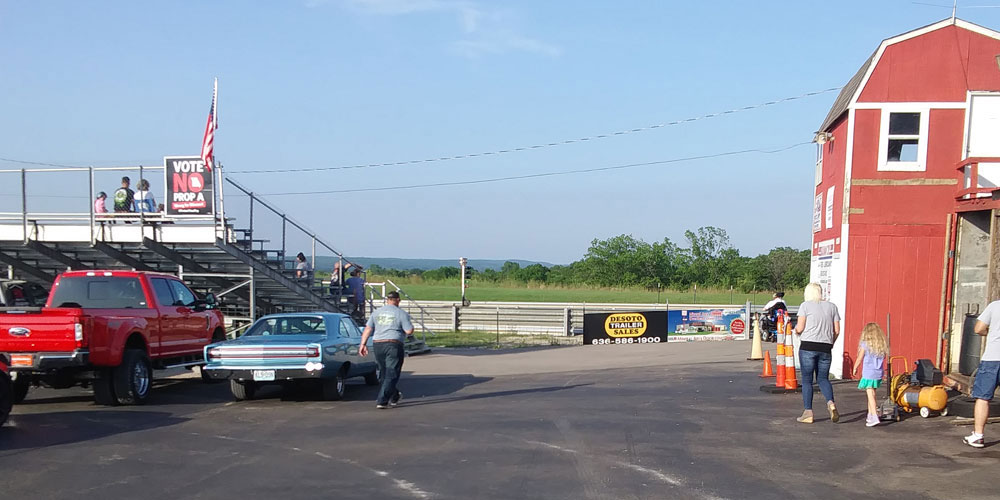 Spent Saturday at the Bonne Terre Drag Strip showing off our 2019 Racing Series Trailer and had a blast!  It’s 28′ x 8′ 51/2″ with a 7′ interior height and gives you plenty of room. Come on down to the store and see for yourself!  Here’s a sneak peek: 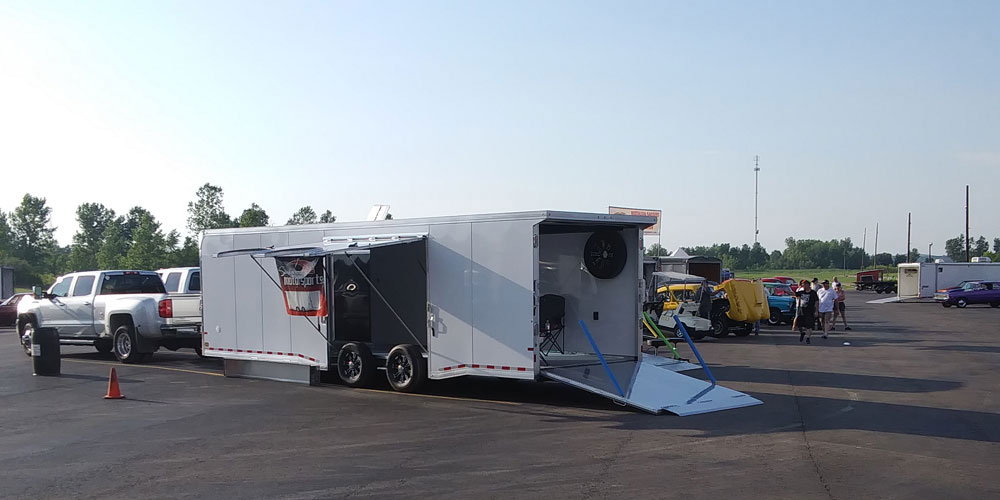 A Big Thanks to the MSHP!

Thank you Missouri State Highway Patrol for your recent purchase of the 2019 Stealth Mustang!  We hope you enjoy your trailer and look forward to seeing the logo of Missouri’s finest decorating its sides.